Home » Le Torri News » Constantius of Perugia, the Saint who winks at the young women.

Constantius of Perugia, the Saint who winks at the young women. 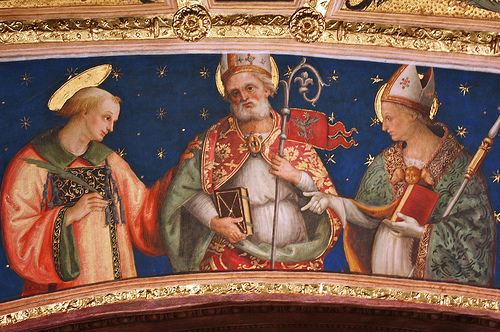 Local tradition makes him the first Bishop of Perugia. This tradition states that he became the first bishop of the city at the age of 30. He was active in evangelism and care for the poor.

Celebrations start the night before his feast day, January 29, with the luminaria, the candlelit procession to the Church of San Costanzo, built on the site of his martyrdom. On the Sunday after his feast, i Perugini gather at a solemn High Mass celebrated in his honor in the Cathedral and then throng the eighty stands at the traditional open market, la Fiera, which always follows a saint’s feast day. The Fiera di San Costanzo fills Borgo XX Giugno, the street heading to his church, San Costanzo. 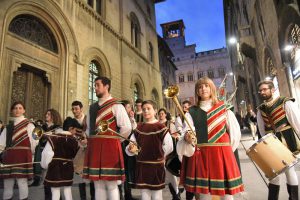 On his feast day, “Torcolo”, a ring-shaped cake made of  pine nuts, raisins, and dried fruit, is a traditional food in Perugia.

Following another tradition, during the feast of San Costanzo, the unmarried girls go to the church of San Costanzo to ask if they will get married within the year: if the Saint winks at the young woman (and  only she can see the wink), the couple will be married within the year. If not, the young man consoles them both with a gift to her  a ring-shaped (!) sweet, il torcolo …and hopes for the Saint’s wink next January! 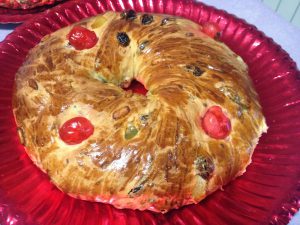 In art, Costantius is often represented as a bishop wearing a mitre and robe and bearing a crozier. He frequently appears in the company of another Perugian patron saint, Sant’Ercolano (Herculanus of Perugia).